Where else but Bent Tree can you see all of the following wildlife in just one day?  I took the following pictures, yesterday, in Bent Tree. Click thumbnails for larger images.

There will be a lot of guests in Bent Tree this week, including the kids participating in Youth Week activities. During the heat wave, take tips from the animals on staying cool:

A previous post was about twin fawns born June 26th in Bent Tree (click here to read the post and see pictures of the newborns). The mother and fawns stayed put for over five hours that day. By evening, they were nowhere to be seen. But, they all came back on Wednesday…so the fawns survived the first 24 hours (see pictures below). Bent Tree is home to bears and coyotes, which are known predators of whitetail deer (especially young fawns). That’s nature. In fact, a bear came around while the newborns were still here, but something startled the bear and it ran into the woods across the street. Both fawns were seen the next morning. I haven’t seen the fawns since, but their mother has come by every day. Maybe she’s found a nice cool place in the woods for her fawns to hide and escape the heat. Mother deer leave their fawns for hours at a time (hiding them in separate places if she has multiples). Newborn fawns have no scent. This makes it harder for predators to find them. 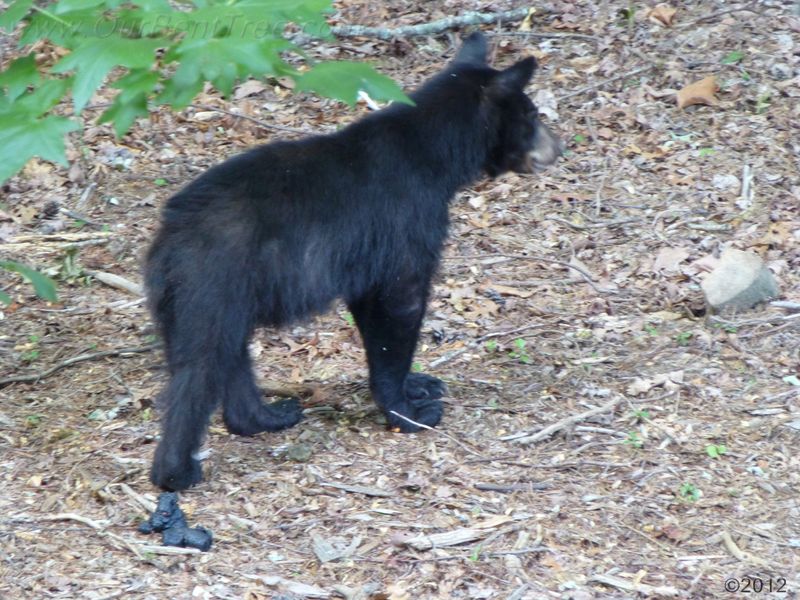 The above quotes were from a Bent Tree newsletter article, “Bears at Bent Tree”, written in 1986.  The author was the first chairman of the Lake & Wildlife Standing Committee.

Click on the following links to see previous posts with bear pictures:

This bear is cleaning up downfall, one tree at a time, by tearing into a fallen tree and eating the bugs, grubs etc. He does a good job of shredding the wood, helping it to decompose faster, adding nutrients back to the soil. 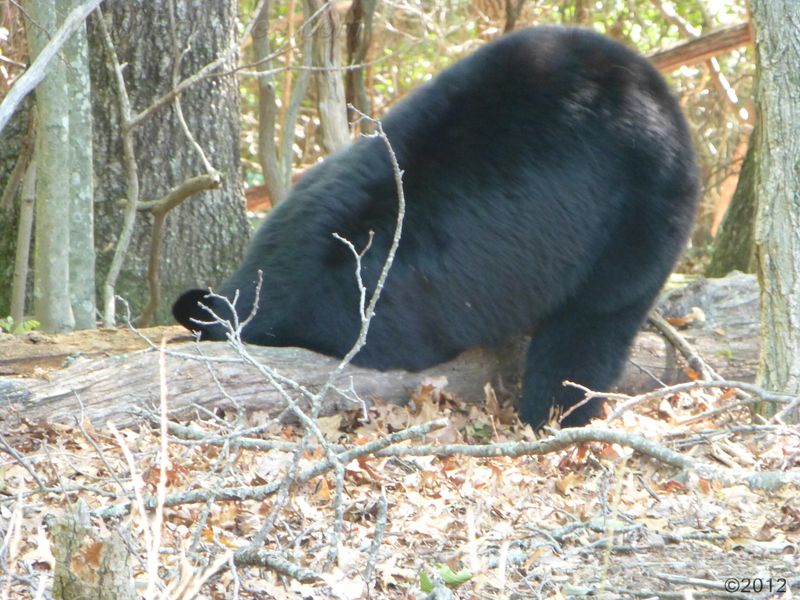 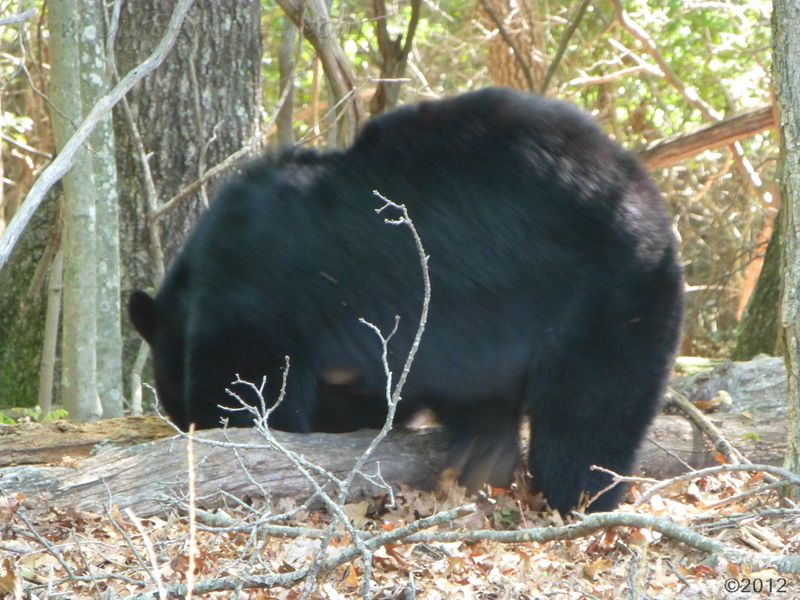 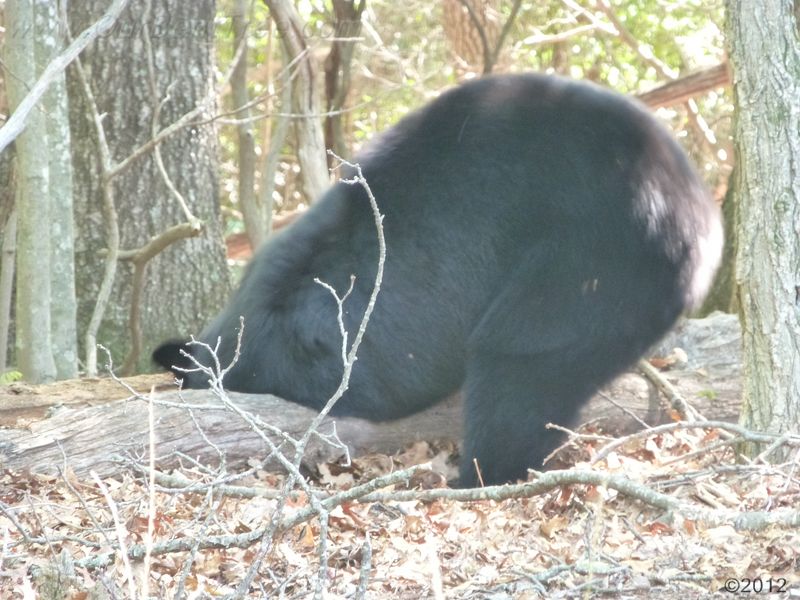 Sit back, relax and enjoy the day. 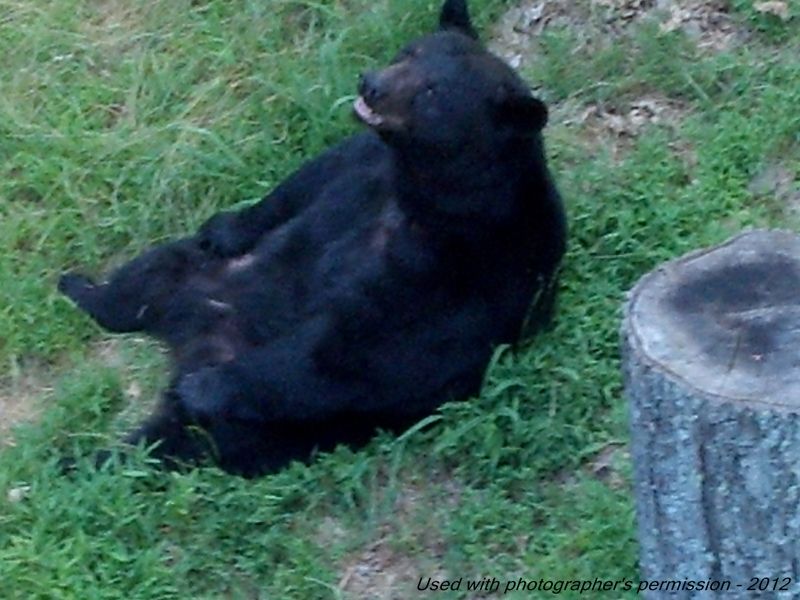 A big bear went by on Saturday, flipping rocks while looking for food.  Here are some pictures.  He kept moving pretty fast so some of the pictures are a little blurry.  He would sniff a rock, flip it, eat whatever, and move on to the next rock.  The last five photos show some of the rocks flipped by the bear.  Click on thumbnails for larger image.

A mother bear and her three cubs were hanging around the 6th hole on the Bent Tree golf course yesterday morning.  Two of the cubs scampered in front of the men’s tee box, then climbed a tree at the left edge.  The mother and a third cub were walking down Duffer Drive (just left of the 6th tee).  Look closely at the photo of the mother bear and you will see a cub beside her, looking right at the camera.  Click thumbnails for larger images.