From the January 1971 edition of the Bent Tree echo

A highlight of Sunday’s Super Bowl (LI) was the coin toss by President George H. W. Bush and Barbara Bush.  After the coin toss, the television announcer mentioned the World War II bombing mission that led to Bush, a 20 year old pilot at the time, having to bail out of his plane after it was stricken by heavy anti-aircraft fire.  Interestingly enough, Bush’s subsequent rescue involved the man who later created Bent Tree.

After bailing out of his plane, Bush floated in a life raft in the ocean for hours before being rescued by the U.S. submarine Finback.  According to Bush, “I saw this thing coming out of the water and I said to myself, ‘Jeez, I hope it’s one of ours.'” The Finback surfaced, the crew pulled Bush on board, and the submarine submerged again .  Bush remained on the submarine for 30 days, and was put to work as a lookout.

The executive officer of the Finback at the time of the rescue was Lieutenant Commander Dean Spratlin, who later became the visionary behind Bent Tree.  Click here to read a Naval Aviation News article about the incident, that was written while Bush was Vice President.

The following contains actual footage of the rescue:

Following is a letter from Bush to Spratlin after he left the Finback: 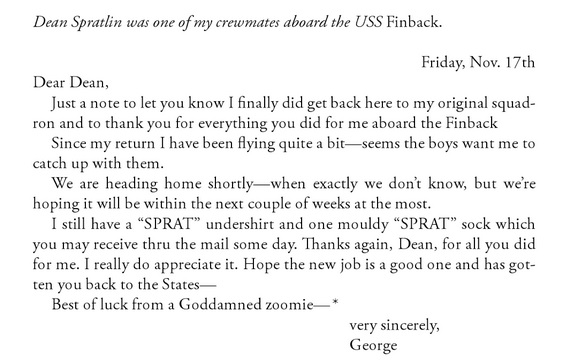 excerpt from “All the Best, George Bush: My Life in Letters and Other Writings” by George Bush